Women Draw Even With Chicago City 2-2

The Torrent women are the hottest team in Milwaukee over the past two weeks. Coming into Sunday night’s showdown with the Chicago City SC they were riding a four match unbeaten streak. With the matchup Sunday being the third in five days, the women knew it was going to be the toughest test yet.

Chicago City opened up the game with total possession. Over the first 10 to 15 minutes they would hold the ball, try and find some space and attempt to make some runs through the backline of the Torrent. Tired or not, Milwaukee was having none of it from the visitors.

Left Back Tested, But Not Broken 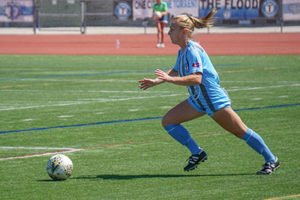 Emma Keckeisen was the target for much of the Chicago City attack in the first half. They looked to create chances by playing balls through and around the left back from Western Illinois University. Keckeisen countered with speed, positioning and outstanding awareness. The visitors had a few chances early against the Torrent, but nothing that would amount to a solid scoring opportunity.

The Torrent would start to turn the flow of the game around near the 20 minute mark. Robyn Elliott began to find her stride on the right flank for a few chances that led to a quality shot on net. The best look Milwaukee would have in the opening 30 minutes of play would come off a set piece from the corner. Jen Eberhardy would serve a beautiful back post cross to Bonnie Lacey for a shot on goal that would be corralled by the Chicago City goalkeeper.

Krahn Nets Third Of The Year 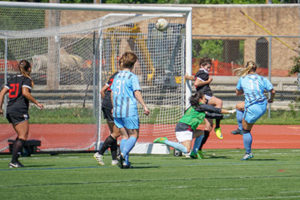 In the 39 minute, the match would completely swing the way of the Torrent. Again, off a set piece from Eberhardy, Jordyn Rolli would take a touch and deliver the ball to the far post for Aubrey Krahn. Krahn would beat a defender and goal keeper with a shot just below the cross bar taken from inside the six. The goal would be Krahn’s third on the season.

Milwaukee would close out the first half with a second high quality chance from Krahn just a minute after her goal. They would also ask their own goalkeeper, Sara Klimisch to come up huge with a save just before the end of stoppage time. Klimisch would be forced to make a fingertip save on a ball that was labeled for just below the crossbar.

In the second half the Chicago City SC would start by netting two goals. The first came in the 50 minute, the second coming off a set piece from the far corner happened just seven minutes later. The Torrent looked to be gassed from their intense schedule, but their will was not broken. 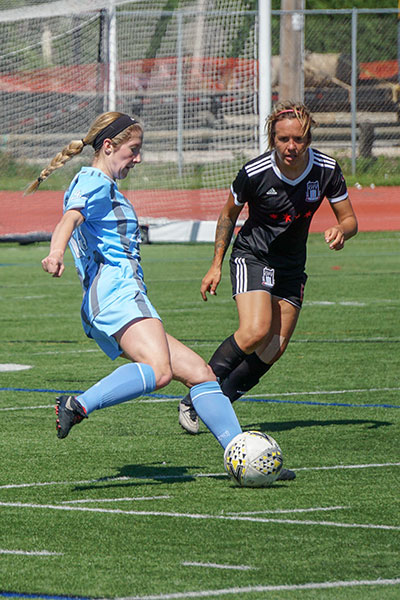 Leah Celarek, after missing a breakaway earlier in the second half, would get an opportunity to redeem herself in the 86 minute of the contest. Aubrey Krahn would gain control of the ball near the top of the box. She would look to play through to a streaking Celarek, who would be taken down from behind. The resulting penalty kick for Celarek would be a strike to the middle of the goal allowing the Torrent to draw even late in the match.

When asked about taking the PK, Celarek said, “Personally, I was just happy to make up for the missed breakaway earlier in the second half.”

Milwaukee would fend off Chicago City for one more strong push up the field in order to extend their unbeaten streak to five matches with a 2-2 tie. It was a tough test for the women, and a strong performance from both teams. The two clubs will have a short turn around as they are scheduled to face off again on Wednesday evening, this time at Illinois Institute of Technology on the south side of Chicago.

“They were a good, solid team,” expressed Celarek. “For it to have been our third match in five days, plus with missing a few players it was a great battle for that tie.”