Milwaukee Gains At Least A Point In 8 straight

Entering Sunday’s season finale, the Torrent women had not lost since the second match of the year. That day featured a young Torrent team that was just getting to know each other. They battled hard, but ended up surrendering three points to the Red Star Reserves.

Since that time, the women put together a streak of seven unbeaten matches. Milwaukee has come together as a team, learned to communicate with each other, and most importantly they learned to believe in each other. These skills would play a pivotal role in their matchup Sunday at home.

The Chicago Red Star Reserves traveled to Hart Park looking to close out their perfect season. They won all nine previous conference matches with a goal differential of plus 35. Chicago began the season with seven consecutive shutouts, before they allowed a goal to Chicago City in the 67 minute of a 5-1 victory.  As an extra bonus to the season, Chicago had never trailed in a match.

Milwaukee saw any hopes of finishing second in the standings erased the night before when the Fire SC 98 collected three points in a forfeit win over the Minnesota Twin Stars. The Torrent would finish third in the conference regardless of Sunday’s outcome. But with so many things going for the Red Star Reserves, the women from Milwaukee would step on the pitch determined to show they could compete with the conference champions.

It wouldn’t take long for the Torrent to come out swinging. Haley Johnson would hand the Red Star Reserves their first taste of trailing in a match at the 8 minutes mark. Midfielder, Leah Celarek would get the play started by gaining possession from the Red Star Reserves. She would shack free from her defender, finding space in the middle of the pitch. Playing the ball off her left foot, Celarek would go over the top to find a streaking Haley Johnson heading up the right flank. Johnson would play a perfect first touch to get around the Red Stars center back, taking a right footed shot past the goal keeper to the far post.

After taking the lead, Chicago would fight back. They would spend much of the first half in possession, pressing high and using speed to get into the defense of Milwaukee. Much of their attack was coming from the flank, looking to play balls through into the middle of the pitch. The Torrent back line, which has played so well all year, stood up to the challenge intercepting pass after pass  and quickly transitioning play to their midfield and forcing Chicago to come back and defend.

In the 23 minute, it would be midfielder Annika Martensson giving the Torrent a two goal lead. The scoring play began with Taylor Tabbert of the Torrent intercepting another Chicago through ball. She quickly played into a cutting Haley Johnson, but the pass was deflected out to the right flank. Jen Eberhardy would take a touch and play a perfect ball to the left foot of Martensson who beat Red Star Reserve goal keeper, Mackenzie Wood.

The Red Star Reserves were not going to go away quietly however. They would mount their comeback utilizing the amazing talents of midfielder, Chandra Eigenberger. Her ability to make space and turn the Torrent defenders would lead to a goal in the 30 minute, and again in stoppage time to close out the first half. 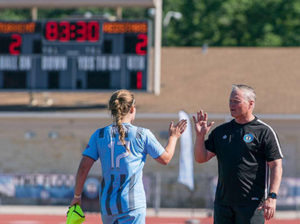 The Second half would find the Torrent battling to be the only team in the WPSL to gain any points against the visiting squad. Newly signed goal keeper, Maddy Henry would make two huge saves in the second half to keep the score even. The Torrent would shift their defensive play, using a combination of players to shut down and limit the chances Eigenberger would create.

The Red Star Reserves would come at Milwaukee with everything they had offensively. Possession would be heavily in favor of the road team, but the defensive play of the entire Torrent squad would win the day. Coach Litton’s late game substitutions would pay off. Having the fresh legs of Robyn Elliott, Gaby Zabala and Jordyn Rolli would help to keep the Red Star Reserves off the scoresheet until the final whistle blew.

“This last game against Red Star gave us an opportunity to gauge our progress over the season,” explained Head Coach Mark Litton. “The first time we played them early in the season, the 0-3 loss gave me the chance to re-evaluate our system of play as well as certain players in certain positions. We reshaped the team and went unbeaten the rest of the season. Even with 6 ties, I look at this as a winning season. I am very proud of this team and what they’ve accomplished in their first season. It’s a great building block for future seasons to come. I’d like to thank my coaching staff, Brian McGuire, Andy Davi, Lito Zabala, and of course our media guy Bryan Giese for all of their hard work and dedication to field a competitive team in our first season. And especially, thank you to all of the fans for the tremendous support we received. I am very encouraged for the future of this program.”