Torrent Play Chattanooga FC to a Draw in Home Match 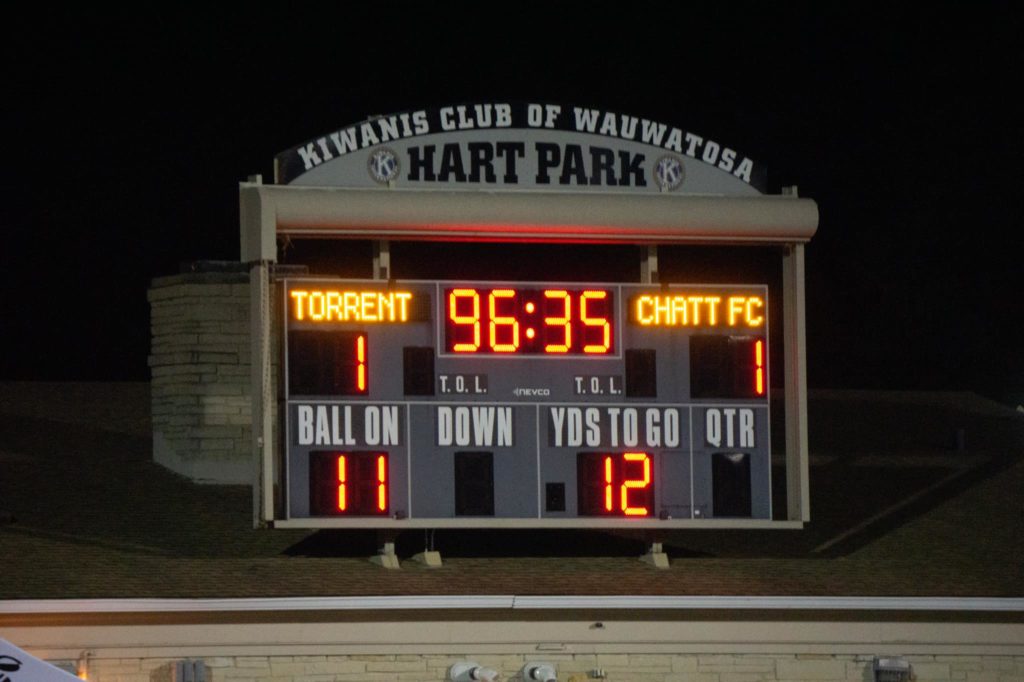 Wauwatosa, WI – In a match that lived up to pre-game expectations, the Milwaukee Torrent and Chattanooga FC played to a 1-1 draw at Hart Park, thanks to beautiful second-half goals from both clubs.

In the first-ever meeting between Milwaukee and Chattanooga FC, the first 45 minutes was a back-and-forth affair that quickly brought a level of intensity on the field that was welcomed by the Milwaukee faithful. Though Chattanooga controlled a majority of the first half, neither side was able to find a clear chance on goal. However, with many strong tackles and a few questionable calls, the stage was set for a dramatic second-half.

The Torrent came out of the locker-room showing much more confidence in their play, with Franciso Felipe having a chance from outside the 18 in the first minute of the second half. Play continued in Milwaukee’s favor. However, like Chattanooga in the first half, while Milwauke

e had much more control of the ball in the early stages of the second-half, they would find getting other opportunities on goal in short supply. In fact, it would be Chattanooga that would be the first team of the night to find the back of the net.

As Milwaukee looked to move the ball over midfield, the Chattanooga defense came up strong winning the ball back and quickly looking for the counter. After a slicing run through a Milwaukee defensive unit that was caught off-guard, the ball was sent across the Torrent box. After a poor clearance by the Torrent defense, Chattanooga regained control of the ball in the box, sending it to a wide-open Joao Costa who was standing in front of the Torrent goal. With a clinical one-touch finish off of his right foot, Costa put Chattanooga up 1-0 in the 62nd minute.

With the goal, Costa now has four in his Member Cup campaign, good enough to keep him in the lead of the Golden Boot chase.

However, Milwaukee would not go easy into that good night.  With emotions riding high, Milwaukee continued to press its attack. Though Chattanooga did well to absorb the pressure and also stage a few attacks of its own, the Torrent would find an exquisite equalizer seven minutes from the end of regulation.

Milwaukee earned a free-kick just outside and one the left side of the Chattanooga. With the ball sent into the box, the Chattanooga FC defenders tried to clear the ball from the area from several headers, only causing the ball to keep going straight-up in the air, where it met the heads of several Torrent players who kept the ball in the Chattanooga box. After a critical header from the right side that sent the ball back in front of the Chattanooga goal, Gonnie Ben-Tal lined himself up for a bicycle kick. With absolute perfect timing, Ben-Tal struck the ball over just out of reach of Phillip D’Amico, where it then struck the underside of the cross bar, bouncing over the goal-line and bringing the game even at 1-1.

The final few minutes saw emotions get even more heightened as Milwaukee thought they had made the comeback complete. In minute 88, Milwaukee lined up for another set-piece, this one forty yards away from the Chattanooga FC goal. Milwaukee had almost every Torrent player standing on top of Chattanooga FC’s box, with Chattanooga FC matching player for player. Lucca Lemos sent the ball over the line of players, where it eventually fell to an on-rushing Sebastian Capo

zucchi. Capozucchi daftly touched the ball into the back of the net, sending the Torrent players and fans into jubilation. However, that jubilation was quickly tempered as the goal was erased from the scoreboard due to Capozucchi being flagged for offside by the assistant referee.

Though seven minutes of stoppage would be added to the end of regulation, Chattanooga would escape Hart Park in a share of the spoils with each team gaining a point on the night. As such, Milwaukee and Chattanooga sit even on points with five a piece, tied for third in the Members Cup table, with Milwaukee having two games in hand on the Tennessee club.