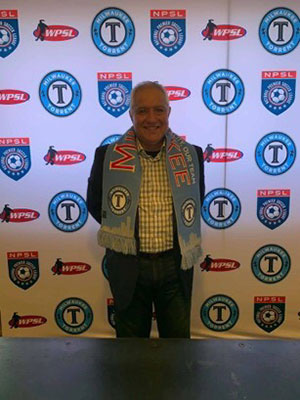 “We are happy to install Cacho Córdoba as our new head coach,” said Davi. “To continue growing the Milwaukee Torrent as an organization, it was important to bring on someone with, Carlos’ extensive coaching experience. He will bring so much to the Milwaukee Torrent, both on and off the field.”

Currently, Coach Córdoba is the Technical Director for Strike F.C., which he will retain the position of while also taking on Torrent’s coaching duties.

“We are very thankful, and appreciative, of Strike F.C. for allowing us to have Córdoba as a coach” said Davi.

“I was very fortunate to coach some of the very best players in the world such as Valderama, Sergio Agüero and Diego Maradona,” said Córdoba. “I’m excited to be coaching professional players in Milwaukee and bringing my experience as both a player and as a coach to the Milwaukee Torrent.”

The Milwaukee Torrent strive to ignite a passion for soccer and create a desire to play the game at its highest levels. One of the goals that the Torrent has is to make professional soccer accessible to everyone in the Greater Milwaukee community. The club is an active force for urban initiatives, supporting the youth in the Milwaukee community through partnerships with the Boys and Girls Club of Greater Milwaukee, as well as Milwaukee Public Schools. The organization works to provide kids with a safe, after-school environment to have fun, build friendships, and enjoy the game of soccer. The Torrent hopes to inspire Milwaukee’s youth as they watch professional soccer teams in the new league.